Grist: The Battle of Thacker Pass

Electric cars require a lot of lithium. A showdown in Nevada shows that getting it won’t be easy.

When Edward Bartell first learned that a lithium mine might be moving into his remote corner of northern Nevada, the longtime cattle rancher wasn’t upset.

“I was actually kind of excited about it,” Bartell said. He knew that lithium is a key metal used in batteries for electric vehicles and the power grid, and he knew the United States is going to need a lot of it to transition off fossil fuels.

But as Bartell started learning more about the proposed Thacker Pass mine — which would be the second, and by far the largest, lithium mine in the United States — he grew increasingly worried about its impacts on his ranching business and nearby ecosystems. In spite of the numerous concerns Bartell and others raised during a comment period in which the government solicited opinions about the proposed mine project from members of the public, Thacker Pass received speedy review and was approved by the Bureau of Land Management, or BLM, on January 15, the Trump administration’s final Friday in office. Construction of mining facilities and “pre-stripping” to expose lithium-rich ores could begin later this year.

Bartell is now suing the federal government to try to stop that from happening.

In a lawsuit filed in the U.S. District Court of Nevada in February, Bartell alleges that the BLM broke the law when it approved the mine’s plan to operate on federal lands based on a “one sided, deeply flawed, and incomplete” environmental impact statement that downplayed the project’s likely effects on groundwater, streams, and a threatened species of trout. Bartell’s goal? Get the federal government to do a more thorough review of the project. If the mine is allowed to move forward without a new assessment, Bartell worries that its surroundings will become an arid, polluted wasteland. 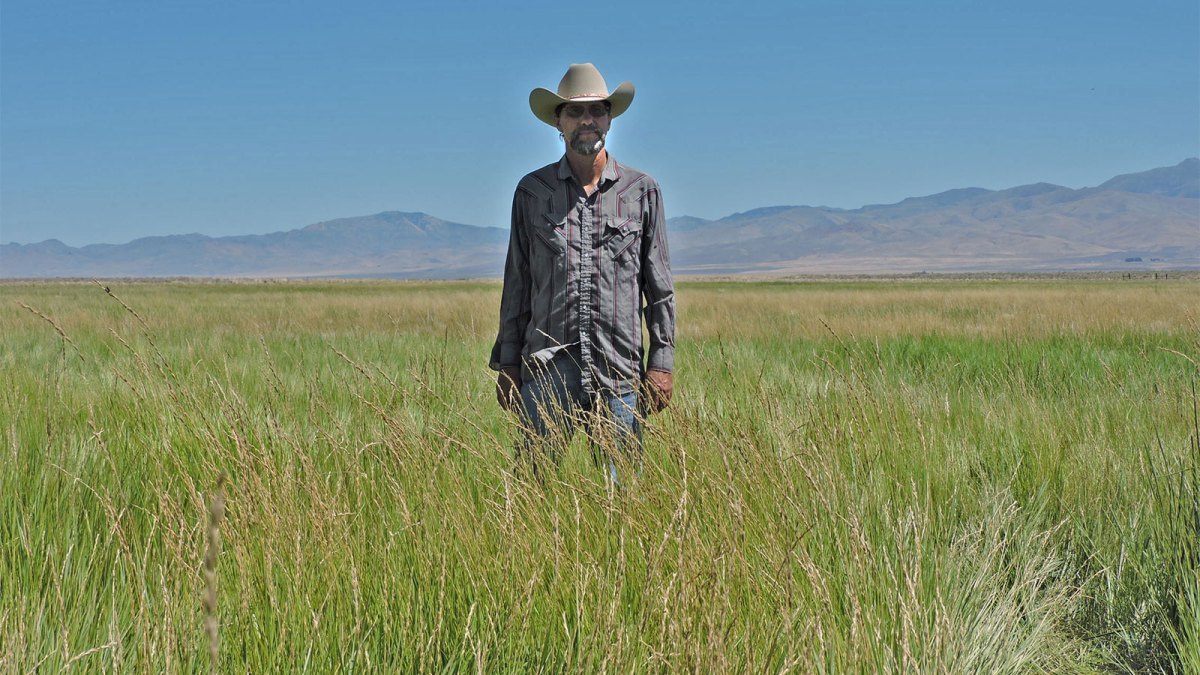 Bartell isn’t the only one taking the BLM to court over Thacker Pass. A couple of weeks after Bartell filed his suit, a coalition of conservation groups filed a separate federal lawsuit asserting that the BLM “swept under the rug” a host of environmental impacts — including groundwater pollution that will exceed federal standards and “severe” impacts to sensitive wildlife like the greater sage-grouse — in its “rush” to approve the project.

The controversy over Thacker Pass highlights a much bigger challenge the Biden administration will have to grapple with in order to quickly transition the U.S. economy to carbon-free energy sources: How to acquire the vast mineral resources that are needed, such as metals needed for batteries, like lithium, cobalt, and nickel, without sacrificing biodiversity or the health of communities living nearby mining projects. Shoring up domestic supplies of these metals is a key concern for the new president, who recently issued an executive order focused on making supply chains more resilient and wrote, in an accompanying statement, that the U.S. “could better leverage our sizable lithium reserves” to expand battery manufacturing. While the U.S. is poor in conventional sources of lithium like salt flat brines, it has sizable “unconventional” lithium resources, including geothermal brines and clays.

But conservationists and grassroots environmental advocates say that if the administration doesn’t figure out how to strike a balance between mining, environmental protection, and the wishes of rural and Indigenous communities, more and more flashpoints like Thacker Pass are coming. Indeed, hundreds of miles south, a second lithium battle is already heating up — this one pitting a proposed mine in Nevada’s Silver Peak Range against conservationists who fear the project will drive a rare species of wildflower extinct.

“There is a lot of pressure to extract materials for what we consider to be the new energy economy,” said John Hadder, the executive director of Great Basin Resource Watch, one of the environmental nonprofits suing BLM over the Thacker Pass mine. “But we have to do it in a way which isn’t business as usual.”

Situated less than 50 miles south of Nevada’s border with Oregon in Humboldt County, the Thacker Pass region is a sea of sagebrush, scrublands, and grasslands that serves a wildlife corridor connecting two mountain ranges. It’s home to pronghorn antelope, bighorn sheep, mule deer, and golden eagles. It includes federally designated “priority habitat management areas” for the greater sage-grouse, a charismatic ground-dwelling bird that conservation groups have been fighting to protect for decades. The Endangered Species Act–listed Lahontan cutthroat trout swims in local streams, and a rare snail, the Kings River Pyrg, has only been found in local springs.

Beneath the surface of Thacker Pass lies another natural resource: Millions of tons of lithium concentrated in soft, sedimentary clays. Lithium Nevada Corporation, the company behind the planned mine, believes it can generate up to 66,000 metric tons of battery-grade lithium annually over the 41 years it intends to operate the mine. The company would dig the ore out of a 1,000-acre, 400-foot-deep open pit and concentrate the lithium on site in vats of sulfuric acid.

This amount could go a long way toward meeting U.S. lithium demand and climate targets. In 2020, the U.S. used nearly 36,000 metric tons of lithium chemicals in batteries, according to data from consulting firm Benchmark Mineral Intelligence. By 2030, that figure could rise to over 300,000 metric tons, driven largely by a booming electric vehicle market. Transportation accounts for 28 percent of U.S. emissions, and automakers are in an arms race to rapidly replace gas guzzlers with lithium-powered vehicles to slash cars’ climate pollution. In a carbon-free future, lithium-ion batteries will also play a key role in storing clean energy for the grid when the sun isn’t shining and the wind isn’t blowing.

“A transition to renewables, facilitated by an efficient lithium-ion battery supply-chain, provides a real opportunity to reduce carbon emissions and mitigate climate change, which will ultimately work to protect every ecosystem on the planet,” Lithium Nevada CEO Alexi Zawadzki told Grist in an email.

But critics don’t want to see any resource, even one so important to the green energy transition, extracted at the expense of local ecosystems.

Bartell first became concerned with the mine’s potential impacts during public meetings in 2019, when he learned of Lithium Nevada’s plans to pump large amounts of groundwater for its operations — up to 5,200 acre-feet per year, according to the company’s plan of operations (enough to fill 2,600 Olympic-sized swimming pools). This intensity of water use will draw down nearby groundwater levels, potentially drying out soils, streams, and springs. Bartell fears this will harm local fauna as well as his 51,000-acre ranching operation, which lies just northwest of the proposed mine site, mostly on land he’s leased from the federal government.

When Bartell brought his concerns to Lithium Nevada at a public meeting two years ago — and later in writing — he says the company downplayed how much water it would be using and shared hydrological data from its consultants that didn’t match his knowledge of the region. In January 2020, around the same time that the BLM announced that it was beginning work on an environmental impact statement for the mine, Bartell hired a hydrologist to independently check Lithium Nevada’s numbers.

That hydrologist found numerous errors with the mining consultancy’s analysis, including that it had classified creeks that run year-round as “ephemeral” and underreported flow rates from many springs. Bartell worries that by claiming there is less water in the area than there actually is, Lithium Nevada could dry up both groundwater and streams and claim that its operations hadn’t made a difference. Despite raising his concerns in writing throughout the BLM’s public comment period last year, the agency incorporated the mining company’s hydrology data throughout its environmental impact statement.

“The BLM did very little, if any, of their own hydrology,” Bartell said. “They just accepted whatever the lithium company provided.”

While other local stakeholders, like the nearby Fort McDermitt Paiute and Shoshone Tribe, are still evaluating the mine’s impacts and didn’t raise specific concerns with Grist, Bartell isn’t the only one worried. The Nevada Department of Wildlife, or NDOW, echoed many of the rancher’s concerns in comments it submitted to the BLM, including that the bureau’s classification of streams as ephemeral was based on “limited field data collection” and that the methods used to determine where groundwater impacts would occur were “insufficient and lack objectivity.” The NDOW also warned that noise levels from the mining operation would likely exceed standards set out in federal sage-grouse management plans, which could drive grouse away from the area. NDOW wildlife specialist Matt Maples told the BLM’s district office in a January 4 letter that the mine’s operations would likely disturb the area’s ground and surface water, as well as vegetation found along the streams and could “have permanent ramifications on the area’s wildlife and habitat resources.”

The bureau “blew off conservation community and NDOW concerns about compliance with BLM’s own sage-grouse plan,” said Kelly Fuller, the energy and mining campaign director at Western Watershed Project, a conservation nonprofit and a co-plaintiff on the lawsuit against the BLM that quickly followed Bartell’s. Her organization submitted extensive comments to the BLM detailing other ways it believes the mine plan would violate sage-grouse protection plans, including by ignoring guidelines around buffer distances from sage-grouse mating grounds and ignoring seasonal protections.

Even Trump’s Environmental Protection Agency had issues with Lithium Nevada’s plan, warning the BLM that it expected “adverse effects to groundwater quality,” including levels of antimony, a federally designated harmful pollutant, that exceed Nevada water quality standards. Antimony, as well as arsenic, will enter the groundwater supply as Lithium Nevada backfills the mining pit with waste rock. According to the project’s environmental impact statement, an antimony-rich groundwater plume is expected to extend one mile downstream from the pit for up to 300 years. Plans for mitigating antimony contamination, the EPA wrote in its formal comments to the BLM, “are not developed with an adequate level of detail to assess whether or how” they would work.

Despite all of these criticisms, the permitting process for Thacker Pass moved along swiftly. Politics seem to have played a role: Last July, the Department of the Interior, which oversees the BLM, sent a letter to Larry Kudlow, Trump’s economic advisor, listing infrastructure, energy, and natural resources projects whose environmental impact statements were “being expedited during the covid-19 emergency.” Thacker Pass was on the list.

“It absolutely was fast-tracked,” Fuller said.