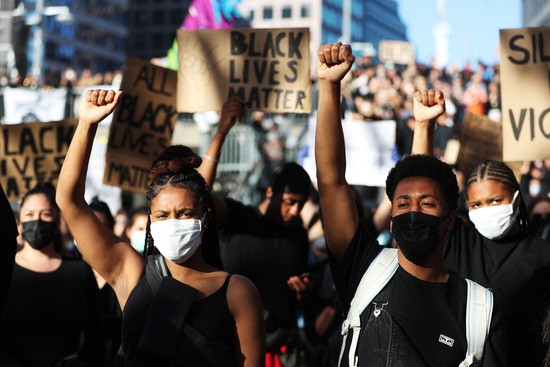 Protesters stand in solidarity with the Black Lives Matter movement against police brutality on June 3, 2020, in Stockholm, Sweden.

It’s difficult to gauge the success of any movement aimed at affecting widespread and systematic change. That’s especially true for the Black Lives Matter movement, which has what can feel like the insurmountable aims of eradicating white supremacy and fighting police brutality in Black communities. But as difficult as it is to quantify the movement’s success, it’s just as difficult to ignore its impact. A new study cited in the Scientific American found that in cities where Black Lives Matter protests had been staged, police killings dropped an estimated 20% between 2014 and 2019.

Travis Campbell, the author of the study and an economist at the University of Massachusetts Amherst, concluded in his research that Census areas with Black Lives Matter protests saw about 300 fewer police homicides. “BLM protests also increase the probability of a police agency having body-cameras, expand community policing, and reduce the number of future property crime-related arrests, which may partially explain the lethal force reduction,” Campbell said in the study. Aldon Morris, a sociologist at Northwestern University, posed the question before the Scientific American of whether Black Lives Matter protests have been generating change. It’s an “inescapable” yes based on the study, Morris said, adding that “protest matters—that it can generate change.”

Founded in 2013, the Black Lives Matter movement took shape in response to the acquittal of a Florida man accused of murdering a Black child. Trayvon Martin, 17, was wearing a hoodie on his way back from a convenience store to purchase candy and juice on Feb. 26, 2012, when George Zimmerman, who considered himself a neighborhood watch volunteer, shot and killed the child. Zimmerman alleged he felt threatened and a jury believed him, finding the then 28-year-old man not guilty on all counts against him. The next year, a former Ferguson, Missouri, cop Darren Wilson shot and killed Michael Brown, an unarmed Black teen only stopped initially for walking in the street on August 9, 2014. Wilson wasn’t even charged let alone convicted. “With the world watching the unrest, BLM would quickly push the issue of police violence towards black people into the fore of American discourse,” Campbell wrote in his study. “As BLM became a national movement, the movement garnished controversy from both allies of American politics for using sometimes violent protest tactics.”

However controversial the tactics—and the movement’s call to defund police agencies even attracted criticism from former President Barack Obama for being too off-putting—the Black Lives Matter movement has attracted vital attention from legislators. “A slew of reforms has followed, such as the United States Department of Justice distributing 21,000 police body cameras to law enforcement during 2014 and eight cities were issued consent decrees to improve policing,” Campbell wrote.

Rep. Ayanna Pressley and Sens. Ed Markey and Elizabeth Warren reintroduced a bill on Monday to end qualified immunity, a legal protection freeing government officials from guilt in lawsuits unless they have violated a “clearly established” statutory or constitutional right. The Black Lives Matter Global Network Foundation and the Movement for Black Lives, a coalition of more than 50 activist groups, drafted sweeping legislation in The BREATHE Act, which Gina Clayton-Johnson, the bill’s creator simply described as “a bill that invests” in a Vox news interview last month. “It’s about making sure that states and local places have what they need in order to provide for the safety of their communities,” Clayton-Johnson said. “And we divest from the very things that have been harming and stand as an impediment to safety.”

The BREATHE Act promises to end life sentences, get rid of mandatory minimums in sentencing, and repurpose a portion of public safety and defense budgets for investment in communities of color, all issues that became central aims of protests last summer. Thousands of people took to the streets domestically and internationally following the death of George Floyd, a Black father who died on May 25 in police custody after a white Minneapolis cop kneeled on his neck for more than eight minutes. So fed up with the cycle of abusive and deadly policing, Black Lives Matter made its initial call on May 30 to defund the police and instead invest in “education, mental health, and non-carceral and non-punitive community-led systems and programs,” the Black Lives Matter Global Network Foundation said in its 2020 impact report. “This was our vision.” Nine months after its initial call, the Black Lives Matter movement had so successfully spread its mission that even a top physics society pledged not to meet in cities with records of racist policing.

Physicist Philip Phillips, also a researcher at the University of Illinois at Urbana–Champaign, drafted a letter with colleague Michael Weissman that appeared in both Physics Today and Science. In it, the researchers asked scientific communities to refuse to hold their annual meetings in cities with records of racial profiling, according to the scientific journal Nature. At least one group, the American Physical Society answered the letter’s request and announced in November it would consider police conduct when choosing cities to meet in for its more than 55,000 members, the journal reported.

“It occurred to me that meetings held in cities are putting Black and brown people at risk if they aren’t choosing with anything in mind about what are the policing practices,” Phillips told Nature.

Governments, organizations, and businesses throughout the country have made statements of support and initiated plans to better support and respond to the needs of Black communities. Etsy and Amazon created webpages on their sites to highlight Black-owned companies. Uber Eats announced it would waive delivery fees for Black-owned restaurants through 2020. And you’d be hardpressed to find a serious presidential contender in the 2020 election that didn’t have a plan for Black America.

Aislinn Pulley, a co-founder of Black Lives Matter Chicago, told Scientific American an especially important result of the movement is the push to collect better data on police killings. Pulley has kept a list of those who have died in interactions with the Chicago Police Department since 2011. “It’s extraordinarily important to have concrete data of the numbers of incidents that involve police violence of all stripes, from killings to torture to being held incommunicado in police stations to people who died in custody,” she told the magazine. “We didn’t have access to that data prior to the movement—and we still have only partial access.”

She said of the Black Lives Matter movement that it can take satisfaction in its impact on policing. “We should use that knowledge to know that the work we’re engaged in—the movement, the advocacy, the organizing—is what we need,” Pulley told Scientific American. “And that needs to expand and get broader, so we can join much of the rest of the world in having zero police killings.”