“The basic explanation is high rents and low wages.” 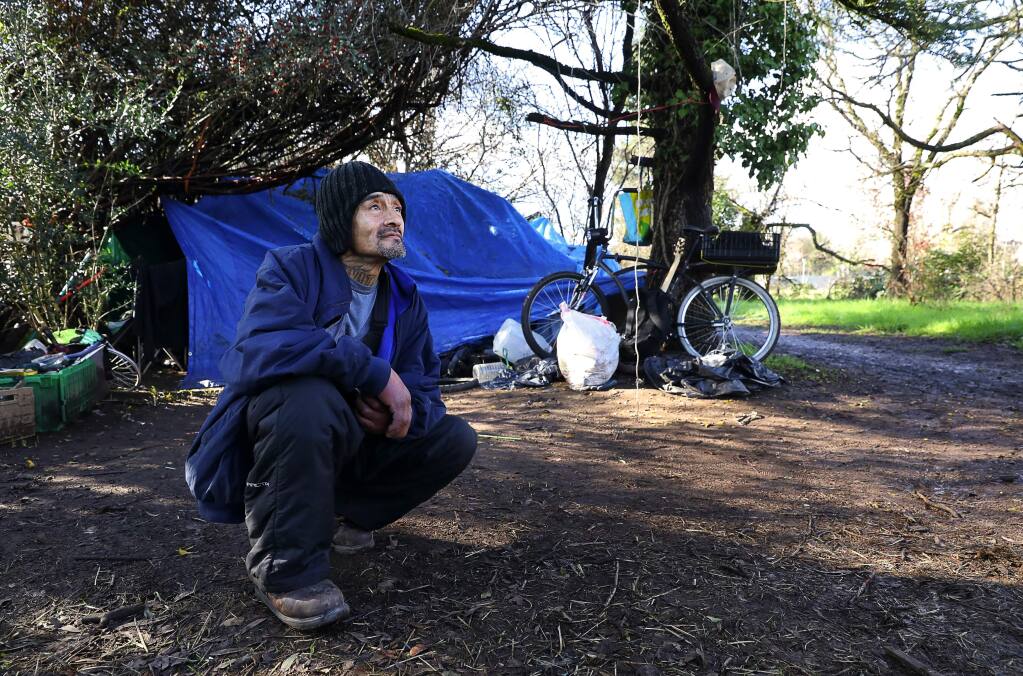 Manuel Santiago has been living in an area of southwest Santa Rosa since Camp Michela, a homeless camp in the Roseland area, was shut down.(Christopher Chung/ The Press Democrat)

Manuel Santiago, a 52-year-old Pomo Indian, has been homeless for many years. He’s lived in tents, RVs, motels – anywhere but a shelter.

In and out of state prison since 1979, Santiago said his many years behind bars include several stints in solitary confinement. That’s left him with an aversion to crowded places like the Sam Jones Hall homeless shelter in Santa Rosa.

“I can’t be around people,” he said Friday, crouched in front of a tent he shares with another person in the city’s southwest area. “Being locked up, I was in the hole a lot. I just don’t deal with people very well.”

Santiago is one of 2,657 homeless adults and one of 715 chronically homeless in Sonoma County, which was highlighted last week in a federal report to Congress as having one of the nation’s biggest homeless populations among largely suburban communities.

The annual homeless assessment report, from the U.S. Department of Housing and Urban Development, said when compared with similar-sized communities, Sonoma County also has among the highest numbers of unaccompanied homeless youth, living in shelters or on the streets, and chronically homeless people. They live without a home for a year or more.

Homelessness remains one of the most stubborn public health problems in the county, one that’s now getting worse after years of improvement. The reversal is confounding to local leaders who’ve made multiple efforts to remedy the predicament.

Actually, the issue is a big problem statewide, too. California has the largest adult homeless population this year among the 50 states, 129,972, and the nation’s highest per-capita rate of homelessness – 33 adults without homes per 10,000 people. Nearly half of the state’s homeless live on the streets rather than in shelters.

“The basic explanation is high rents and low wages,” said Adrienne Lauby, a member of Homeless Action, which has been critical of recent efforts by city and county officials to resolve this alarming community problem.

Lauby and other advocates say there’s a severe shortage of permanent housing for area homeless people. Without such housing, they say, coordinated efforts to get people off the streets and on a priority list for permanent housing are little more than a revolving door of people coming in and out of temporary homeless shelters.

Santiago said he spent five weeks in a local Motel 6 after he was evicted last spring from the Roseland Village homeless encampment behind the Dollar Tree on Sebastopol Road. The only housing option he was given was the Sam Jones shelter, which for him has too many other homeless people.

He said many of those experiencing chronic homelessness have simply given up. “No one wants to hire me because of my record,” he said, tears welling up in his eyes. “No matter how hard I try, nothing changes.”

HUD’s office of community planning and development collects data to compile its report from homeless counts conducted on a single night in January nationwide by local agencies called Continuums of Care. Sonoma County’s count of 2,657 homeless adults living outdoors or in shelters in 2018 was 6 percent higher than in 2017.

Among largely suburban U.S. communities, the size of the county’s adult homeless population ranked second between Orange County, 3,790, and Honolulu County, 2,905. Rounding out the top five in the largely suburban category, this county had more homeless adults than in St. Petersburg/Pinellas County, Florida, 2,235, and Riverside County, 2,087.

Jennielynn Holmes, director of shelter and housing for Catholic Charities, said this year’s local homeless count identified a troubling statistic among those experiencing chronic homelessness. That population grew 25 percent, jumping from 598 in 2017 to 747. That number of chronically homeless ranked the county third nationally among largely suburban areas behind Orange County and Honolulu County.

After the county opened The Palms motel nearly three years ago as permanent homeless housing for 60 veterans and 44 chronically homeless people, the landscape began to change, she said. In the first year, chronic homelessness decreased by 20 percent, the number of homeless veterans fell by 23 percent.

Holmes said that in the first six months, there was a sharp reduction in law enforcement interactions with the people who lived at The Palms. Also, she said there were big drops in ambulance transportation, inpatient hospitalization and in-crisis service calls to suicide and domestic violence telephone hot lines.