Another reason to ban glyphosate (RoundUp) in the vineyards. “We don’t want to wait the next three generations to find out the chemicals that are in use now cause breast cancer,” said Brody.

A woman’s exposure to the pesticide DDT during pregnancy can increase her granddaughter’s risk for breast cancer decades later, according to a new study.

Published today in Cancer Epidemiology, Biomarkers & Prevention, the study found a significant association between DDT in grandmothers’ blood during pregnancy, and obesity and early first menstrual periods in their granddaughters—factors known to increase the risk for breast cancer, high blood pressure, diabetes, and heart disease.

“This is the first three-generation study that [shows] it’s plausible that an environmental chemical in a grandparent can impact obesity and timing of menarche in the grandchild,” Barbara Cohn, a study author and director and senior research scientist at the Public Health Institute’s Child Health and Development Studies (CHDS), told EHN.

Researchers have established health effects from transgenerational exposure to chemicals in laboratory animals, but never before in humans. Grandchildren’s exposure can occur when their mothers are in utero and their mother’s egg cells are in development.

DDT compounds are known endocrine-disrupting chemicals that can alter and interfere with natural hormones that are essential for development. DDT exposure has been linked to breast cancer, birth defects, reduced fertility, and an increased risk of diabetes. It was banned in the United States in 1972 but is still used in other countries to kill mosquitoes that carry malaria.

Conducted by researchers at CHDS and the University of California at Davis, the study relied on blood samples collected from pregnant women between 1959 and 1967 as part of the CHDS study that has followed 20,000 pregnant women in California’s Bay Area, and their families, for more than 60 years. CHDS investigates how health and disease are passed on between generations. The original cohort of women, the grandmothers, gave blood samples at each trimester during pregnancy and one sample shortly after they gave birth.

The current study is based on a subset of 365 adult granddaughters. The risk of obesity (Body Mass Index greater than 30 kg/m2) in young adult granddaughters was found to be 2 to 3 times greater when their grandmothers had higher levels of o,p’-DDT, a minor compound of DDT, in their blood during or just after pregnancy. Similarly, granddaughters were twice as likely to have earlier first menstrual periods (before age 11) when their grandmothers had higher o,p’-DDT blood levels.

Previous CHDS studies have shown that mothers’ DDT exposure during pregnancy or immediately after birth correlates with increased risk of breast cancer and the prevalence of breast cancer risk factors, including obesity, in their adult daughters. While the granddaughters were too young (median age of 26) to measure breast cancer risk, the researchers state that “the impact can’t be ruled out.” 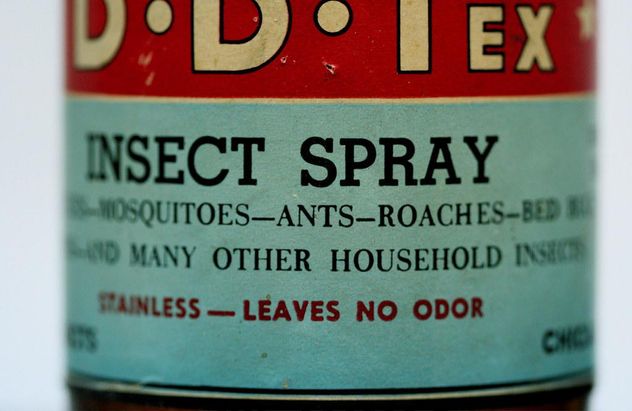 DDT was banned in the U.S. in 1972 but is still used in other countries to kill mosquitoes that carry malaria.(Credit: Tim Lang/flickr)

The study breaks other important ground, according to Julia Brody, executive director at the Silent Spring Institute, who was not involved in the study. First, it shows consistency that o,p’-DDT is the best marker for recent exposure. Most previous studies, conducted after DDT was banned in the U.S., have measured DDT’s main breakdown compound (DDE) in women’s blood and they largely failed to find a connection to breast cancer.

CHDS researchers focused on o,p’-DDT, a contaminant comprising roughly 15 percent of commercial grade DDT, as a marker for active exposure—that is, exposure during pregnancy many decades ago—because it is more quickly metabolized than DDT’s main ingredient (p,p’-DDT) which breaks down to DDE.

Second, Brody told EHN, the study shows, “You can’t assume that exposure later in life is the same as exposure early in life.” Exposures to DDT at pregnancy appear more impactful than at mid-life, the age that other researchers have focused their investigations into DDT and breast cancer risk.

Cohn agrees. Her research shows that DDT exposure during pregnancy and at puberty is particularly harmful. “The issue of the vulnerability of a pregnant woman should be a major part of the story,” she said.

Researchers further conclude that their results suggest that ancestral DDT exposures may be a contributing factor to the global trend in today’s rising obesity rates, and the falling age at first menstrual period.

Though they were not able to account for diet or exposure to other so-called obesogens (chemicals associated with obesity), Cohn pointed to the strong association they found between grandmothers’ DDT levels and granddaughters’ obesity and said that for other factors to explain granddaughters’ obesity, “only the daughters whose grandmothers were exposed to DDT would have to be exposed to current obesogens today,” and that’s unlikely.

Kelle Moley, deputy director at Reproductive Health Technologies, Bill and Melinda Gates Foundation, thinks the theory has “biological plausibility.” She’s studied factors in transgenerational obesity in laboratory animals and finds it interesting to see a similar effect in humans. “The study, of course doesn’t explain all of it, but it could be some contributing factor to the rise in obesity,” she said.

Moving forward, both Cohn and Brody would like policymakers to view the study as proof of concept that exposure to endocrine-disrupting chemicals can impact generations, and to begin looking to animal studies that have documented the impact of endocrine disruptors on future generations to devise policies that reduce human exposure.

“We don’t want to wait the next three generations to find out the chemicals that are in use now cause breast cancer,” said Brody.