Our supervisors policies are putting us at risk…Hopkins still pushing biomass industry.

What will California’s dry spring do to wildfire season? Here’s what researchers say 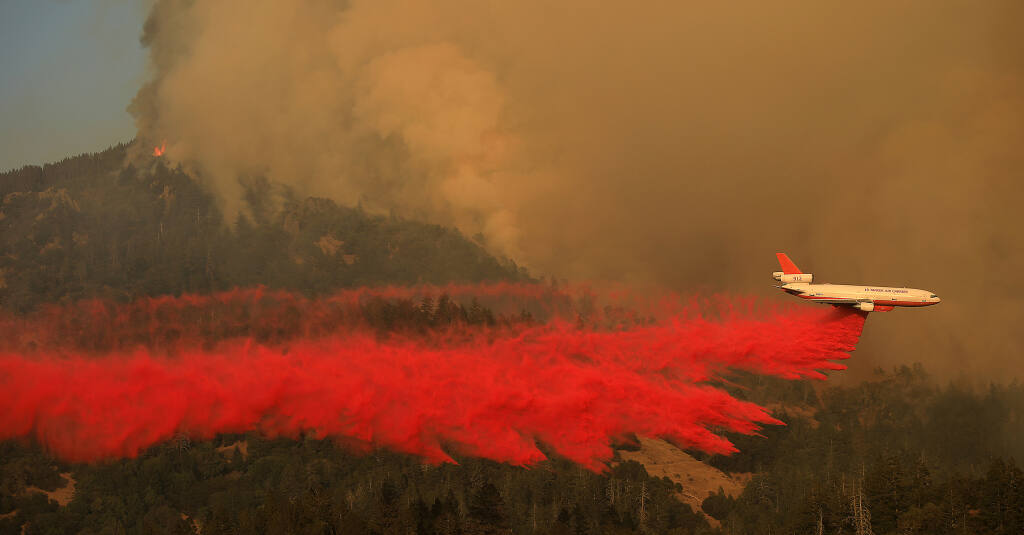 A blow up in the Palisades above Calistoga prompted a response from aircraft, Wednesday, Sept. 30, 2020, as a retardant line is put down between Highway 29 over Mt. St. Helena and the Glass fire flames. (Kent Porter / The Press Democrat, 2020)

OPINION: OCCUPY: How is our local and state government handling this?  Clearcutting, logging, and removing vegetation.  These ecology-destroying practices got us in this trouble.  The money being spent for removing trees and vegetation from the forests doesn’t stop fires from reaching people’s homes unless it is within 60-100 feet (a little more on a slope).  Instead of making all of this worse by disturbing the balance of nature, all available money should be spent on home safety assessments and making vulnerable homes safe: fire-safe roofs and sprinklers, metal screens over vents, gutter shields, replace wooden fences, stairs and decks, and impeccable leaf, dead brush and lower tree branch removal within defensible space.  Also solar panels, ovens and showers and decentralized energy systems such as microgrids for when PG&E shuts down during fires.  The big power systems are raking in the money, literally, rather than putting those resources, that our taxes paid for, where the people are.

FRESNO — California is bracing for what’s likely to be another destructive wildfire season in light of record-dry conditions.

A number of hot spots are in the Sierra Nevada, where rural communities are still reeling from unprecedented wildfires last year in both size and severity.

“We should get ready for a very tough fire season,” said Adam Kochanski, who leads the Wildfire Interdisciplinary Research Center’s fire modeling group at San Jose State University. That work included tracking the Creek fire that ignited in eastern Fresno County — California’s single largest blaze — in real-time with a blend of technologies.

The research center has never seen April fuel moisture levels so low in many California places.

“Something like this has never happened before,” Kochanski said, “and it’s something absolutely unusual and something we haven’t seen, and that makes us concerned.”

Fuel moisture percentages in many places are below 100% when they should be over that threshold in the spring, he said. 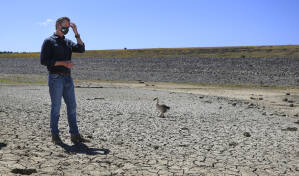 ‘This is without precedent’: Newsom declares drought for Sonoma, Mendocino counties

The National Weather Service at Hanford, California, is reporting a similarly grim situation. NWS meteorologist Kevin Durfee said conditions are among the driest ever, with fuel moisture levels mirroring those not normally seen until June.

Kochanski said at Shaver Lake in Fresno County, fuel moisture is lower than what is normally seen at the end of August.

Some rain, and snow in the Sierra, is expected this weekend, but that precipitation will barely make a dent in drought conditions, Durfee said.

Durfee said that declaration “paves the way” for declarations in other California counties.

The U.S. Drought Monitor shows most of California in severe or extreme drought, including the central San Joaquin Valley.

In a statement Thursday, the National Weather Service said there are “extreme drought conditions” in much of Tulare County, the foothills and higher elevations of Fresno County, and the eastern third of Kern County.

“Extreme drought conditions also extended into the higher elevations of Madera County just north of the San Joaquin River and into a portion of Kings County near Corcoran.”

“Moderate to severe” drought conditions exist over the remainder of the interior of Central California.

The U.S. Department of Agriculture recently declared 50 of the 58 counties in California as “drought disaster areas,” including Mariposa, Madera, Fresno, Tulare, Kings and Kern counties.

Kochanski said Ponderosa Basin, located between Oakhurst and Mariposa, is experiencing its driest fuel moisture levels over five years of available data there. Other Sierra locations with very low fuel moisture include Ash Mountain at Sequoia National Park and the Eastern Sierra, according to weather station data compiled by Kochanski and two of his students, Jack Drucker and Angel Farguell.

Much of the wildfire center’s research focuses on the San Francisco Bay Area, but it also extends throughout California. Live fuel moisture in the South Bay Area this April is the lowest the center has recorded since they started work there in 2009.

Fresno County Cal Fire spokesman Dan Urias also talked about “critical fuel moisture” and drought conditions that could result in a bad wildfire season. He shared a few tips to prevent wildfires: Don’t mow or cut grass after 10 a.m., when sparks from striking rocks have a greater chance of igniting vegetation, and clear vegetation around homes and structures.

Durfee in his National Weather Service analysis said fire danger should be elevated “especially over the higher terrain” of Central California at least through September due to the combination of above-normal temperatures and dry fuels.