This L.A. project shows that homeless housing can be done quickly and cheaply For years it was just another dreary piece of the downtown Los Angeles backdrop — a vacant lot between the county jail and the rusted hulk of a factory.

But since Thanksgiving, two three-story buildings, flanked by a village of trailer homes, have sprung up on the former industrial site.

When the last touches of landscaping are done next month, the 232-bed Vignes Street development will have shattered the axiom that homeless housing takes years to build and is exorbitantly expensive. From start to finish in under five months and at a cost of about $200,000 per bed, it has shaved years and hundreds of thousands of dollars off a traditional homeless housing project.

“When did we ever think we would be able to do something so fast at such a low cost at such an opportune time?” said L.A. County Supervisor Hilda Solis, who initiated the project with a motion adopted by the Board of Supervisors on Sept. 29. “I was amazed. By Oct. 11, the site work had begun.” 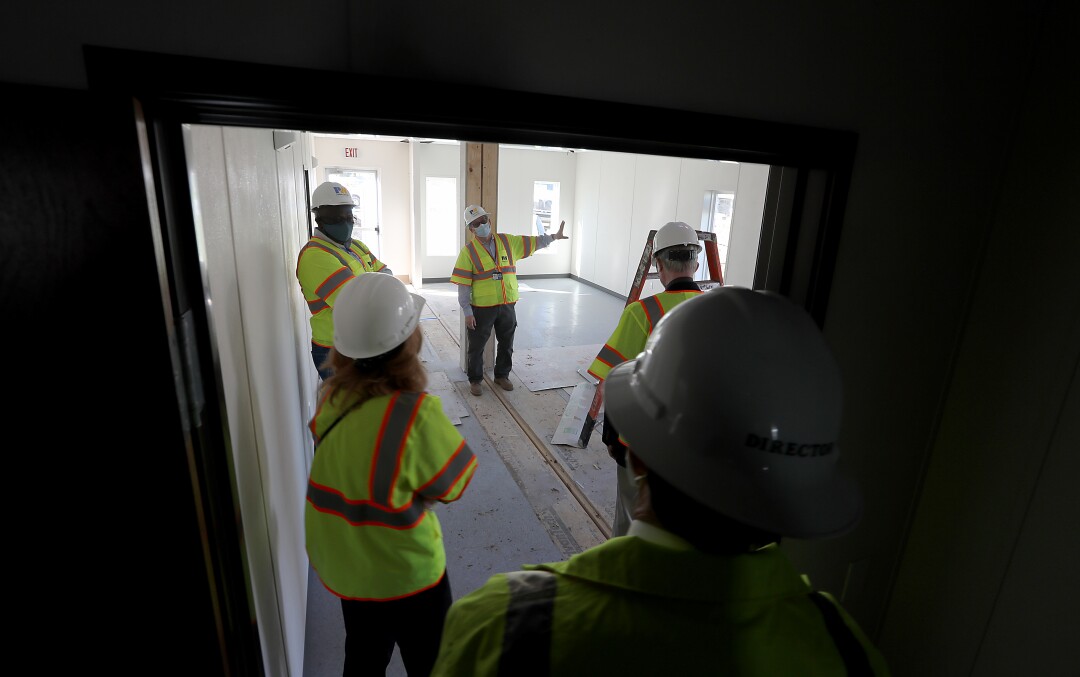 Conceived as an experiment, the project is a hybrid of permanent and temporary structures and will be used flexibly for both housing and shelter.

Unlike traditional homeless housing projects that are either designed for permanent residency with services or for short-term shelter, the Vignes complex will have both. The two main buildings, constructed of once-used shipping containers, will have 132 units of permanent housing. The trailers, each divided into five units, will be for interim housing. The administrative building will house dining facilities, laundry and support services such as case management and counseling to serve both the permanent and interim residents.

The main buildings, placed on concrete foundations to make them permanent, may open as interim housing and transition with time.

“The goal is house people as quickly as you can,” said Sarah Dusseault, a commissioner with the Los Angeles Homeless Services Authority who advised Solis on the project. “Get people into housing right away, even if it’s going to be operated as temporary.”

The trailers, placed on temporary supports, can be moved in the future, leaving open the option to build permanent multistory buildings to expand the housing.

The experiment took advantage of unique circumstances and might be difficult to repeat.

In some ways the project was shaped by the COVID-19 pandemic. The bulk of the funding came from the federal CARES Act, allowing the county to sidestep the usual convoluted process of finding money for affordable housing. And the health emergency provided justification for exemptions from environmental review and competitive bidding.

Another bonus was the 4-acre downtown parcel. The property had long been a factory that manufactured oil well equipment and later a machine shop. The buildings were leveled in 2018, and the county had bought the property as part of the jail replacement project that the Board of Supervisors later shelved in its decision to shift resources from jail to community care.

Those advantages, however, don’t entirely account for the project’s speed and cost.

Miguel Santana, who spent decades as an administrator in both the city and county before serving as the chairman of a citizen committee overseeing the city’s $1.2-billion Proposition HHH housing bond program, credited the county’s public works culture as particularly suited to building quickly and efficiently.

The county Department of Public Works typically assembles a team including those responsible for land use, social services and construction, he said. “It’s clear whose responsibility it is to get it done, when and by what budget,” Santana said.

There were also intangibles that motivated everyone involved, said Mark Pestrella, the director of public works.

“We’re so delighted to be part of the solution for homelessness,” he said. “Public servants are all so excited to be given the opportunity to make a difference. People just dig in when they need to.”

The authorization in Solis’ board motion to skip competitive bidding allowed Pestrella to seek out Bernards, a design and construction firm that he said was reliable and would work with the county “hands-on in a construction, not just contracting, relationship.”

Bernards subcontracted with VESTA Modular, a national company with experience handling one of the big roadblocks in modular construction.

VESTA found a manufacturer in Boise, Idaho, for the 20 wood-frame trailers that would be shipped by truck to the site for the interim shelter. A 6,000-square-foot administrative building with offices, meeting space, a commercial kitchen and laundry was shipped in sections from Texas.

The once-used shipping containers that made up the two main buildings came from Carson. By a stroke of luck, CRATE, a 2-year-old container conversion company, had capacity in its factory after another job was delayed by the COVID-19 pandemic.

The modular construction kept the basic cost to just over $86,000 per bed for the main buildings and $50,000 per bed for the trailers. Exterior elevators, the administrative building and site preparation, including removal of underground gas tanks, brought the total to $48 million, or $206,000 per unit, not including the county’s cost of $24 million for the land.

Solis said she initially had qualms about using shipping containers but was won over when she saw the interiors.

“The environment is quite impressive,” she said. “It’s just like being at a Best Western, only smaller.” 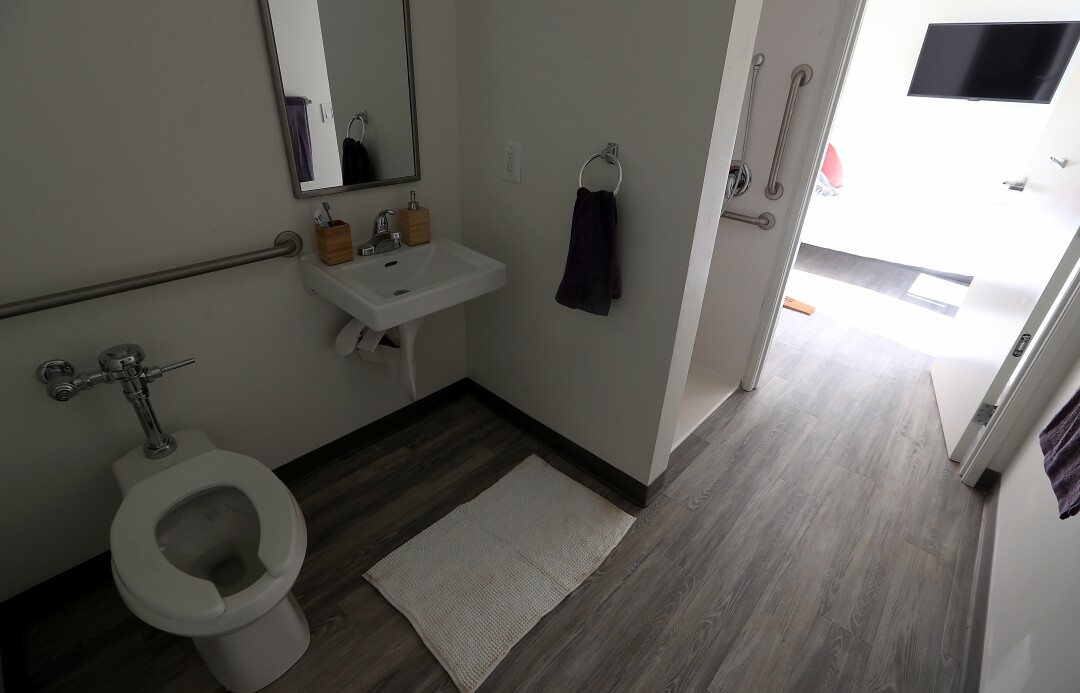 The trailers “won’t be something that typically surrounds a homeless or interim shelter,” she said. Each will be divided into five residences with their own refrigerator and bathroom.

“That’s going to be the biggest eye-opener for other public officials,” Solis said. “Treating homelessness can be done with dignity and respect.”

Solis foresees the development as a step in the transformation of a gritty industrial district on the murky boundary between Chinatown and downtown into a community oriented around social benefit.

Plans are already in place for an expansion onto the property to the north where California Drop Forge manufactures precision components for the aerospace and medical markets. The company is scheduled to relocate by next year.

Two neighbors are Homeboy Industries, a celebrated gang rehabilitation and reentry program, and the California Endowment, a foundation dedicated to expanding access to healthcare. Both organizations are in mutual discussions on how to use other nearby properties.

Solis said the county is working with them to come up with a master plan she called Hope Village.