“….US litigation has recently resulted in the release of hundreds of secret Syngenta documents – the so-called Paraquat Papers (click link for study) – that show how the Swiss agrochemical giant used manipulated data, and “safety” measures it knew were ineffective, to keep its highly toxic weedkiller on the market – despite thousands of deaths.”

GMWATCH: Swiss voters to cast ballots on pesticide-free farming amid climate of fear 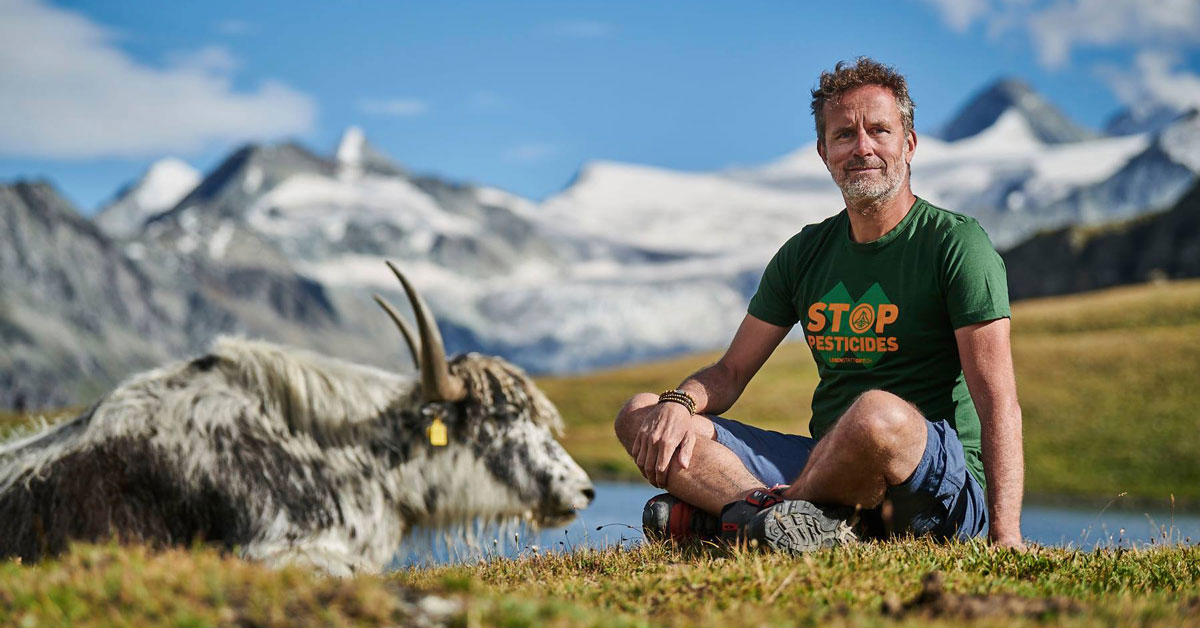 In the run-up to a June 13 referendum in which voters will decide whether to support two measures that crack down on pesticide use in Switzerland, leading supporters of the two proposals have been on the receiving end of not just an avalanche of abuse, but even death threats. 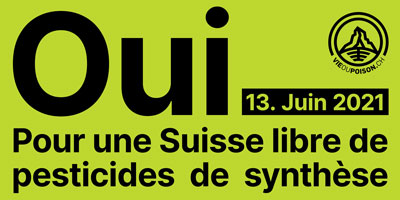 As a result, Céline Vara, a lawyer and Green Party politician who helped initiate the proposal for a ban on synthetic pesticides, is now under police protection. Franziska Herren, who initiated a clean drinking water initiative, which, if passed, would stop farmers who use pesticides from claiming state subsidies, has also received death threats.

So too has organic farmer and Green politician Kilian Baumann, who backs both initiatives. Baumann has cancelled all his public appearances until after the referendum because he says the threats against him and his family have reached such frightening proportions that he has “a bad feeling when I leave my family and farm behind in the evening”.

This prompted Fabien Fivaz, a member of the Swiss Parliament, to warn that what was happening was “serious for our democracy”.

Edward Mitchell, a professor in the Laboratory of Soil Biodiversity at the University of Neuchâtel, added that he knew of two other opponents of pesticides that had also received death threats, bringing the total to five.

The death threats form part of a wider campaign of intimidation by opponents of the citizens’ initiatives. Farmers and beekeepers who support a yes vote have complained of a climate of fear, aimed at stopping them expressing their views for fear of retaliation.

The pro-pesticides lobby has flooded the country with posters attacking the measures and there are multiple complaints of banners and posters put up in response being torn down. A number of beekeepers also say they have been threatened with expulsion from farms and even with harm to their bees if they try to display their preference for a yes vote.

Small farmers are facing a similar campaign of coercion with few daring to speak out, according to Edward Mitchell, “Peasants supporting our initiative face pressure, threats, verbal and physical attacks, destruction etc. It hurts to see these brave people attacked to the point of not daring to speak out. We are close to omertà!” 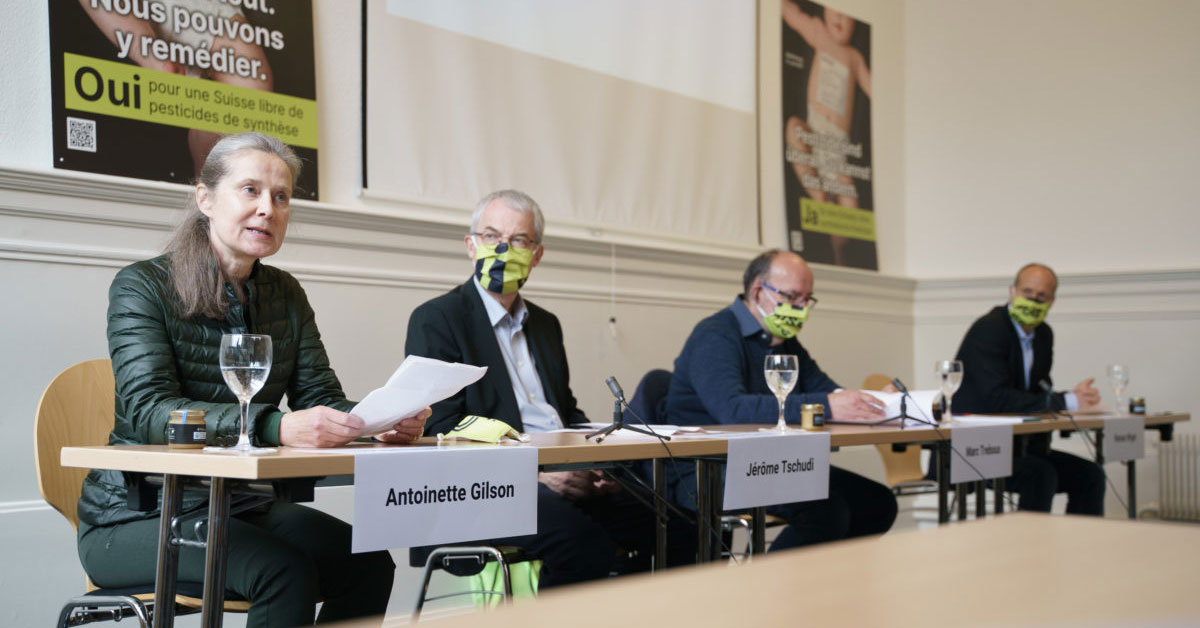 An organic farmer who works in a small French-speaking village on the Swiss Plateau did have the courage to speak to the news agency SwissInfo about what was going on, but he insisted on remaining anonymous: “My children live in fear because they have suffered attacks and insults on social media for weeks. They have forbidden me to put up a banner in favour of the anti-pesticide initiatives on my farm out of fear of reprisals. Personally, I don’t mind being insulted all day by my colleagues – I have thick skin. But I want to protect my family.”

All this might come as a shock to anyone familiar with Orson Welles’ portrayal of Switzerland as a country devoted to democracy, peace and brotherly love, or Robert de Niro’s complaint that it’s a country without drama, conflict or jeopardy.

After all, Switzerland already has a moratorium on GMOs in farming that has been in place since Swiss voters first opted for it back in 2005. It was accepted by every single Swiss state (canton), even the most conservative ones. And although the original ban was set only to last five years, the Swiss parliament has since extended it repeatedly by popular demand, with neither farmers or consumers showing any interest in lifting it.

But the proposals to crackdown on pesticides faced serious pushback right from when they were first mooted in 2016. Although one in six Swiss farms already has organic certification and the number is growing, Switzerland is also home to the Basel-based mega corporation Syngenta, now owned by ChemChina. In fact, Swiss agrochemical businesses generate nearly $50 billion in annual sales worldwide. And global agrochemical firms are understandably keen not just to keep Switzerland as a market for their products but to avoid it setting an example to the rest of the world by becoming the first country to ban ALL pesticides.

The opposition of these corporate giants, together with Switzerland’s biggest farmers’ association, has meant the citizen committees that back the proposals have found themselves up against far larger forces.

Supporters of the anti-pesticide proposals accuse the agrichemical lobby of stirring up hostility via a deliberate disinformation campaign. This, they say, has misled many farmers into believing the measures are a direct threat to their existence.

In reality, the two proposals allow for an eight- and a ten-year transition period respectively, as well as a series of other measures aimed at supporting farmers in the changeover to synthetic pesticide-free farming, including financial assistance and a reorientation of agricultural research, extension and training. There are also plans for import controls to stop Swiss farmers being undercut by lower-standard farm produce.

If PR manipulation of farmers is occurring, then there is ample evidence from across Europe and beyond of the dark arts the pesticide industry and its PR operatives have employed to generate “grassroots” farmers’ campaigns in defence of the industry’s products.

Twisting the truth and using devious tactics to protect its profits has long been a hallmark of the agrichemical lobby, just like the tobacco industry before it.

For instance, US litigation has recently resulted in the release of hundreds of secret Syngenta documents – the so-called Paraquat Papers – that show how the Swiss agrochemical giant used manipulated data, and “safety” measures it knew were ineffective, to keep its highly toxic weedkiller on the market – despite thousands of deaths.

The Basel-based giant is also at the centre of a just-published paper about the blowback it orchestrated against critics of another of its herbicides – atrazine. Syngenta’s principal target for bullying was UC Berkeley’s Tyrone Hayes, whose research showed atrazine caused male frogs to become hermaphrodites. The African American endocrinologist says a Syngenta scientist even threatened to “have me lynched” and “threatened my wife and my daughter with sexual violence”. And this was just one part of a systematic company campaign aimed at intimidating and discrediting Hayes for highlighting concerns about Syngenta’s popular weedkiller.

But even these attacks pale beside the 2018 verdict of a Brazilian court that Syngenta was liable for the murder of a landless workers’ leader, Valmir “Keno” Mota de Oliveira, and the attempted murder of a small farmer, Isabel Nascimento de Souza, who were protesting against Syngenta’s involvement in illegal research.

Against such an ominous backdrop, a group of organic farmers in the Swiss canton of Jura staged a striking show of defiance. To show they wouldn’t be silenced or inhibited by those spreading fear and disinformation, they got naked against pesticides.

The dozen or so men and women farmers released a carefully staged photo, taken on an idyllic-looking Jura farm and emblazoned with the “Oui” banner of the campaign for a Switzerland free of synthetic pesticides, that they titled “Naked peasants defend their point of view”.

In an accompanying statement, the small farmers denounced what they called “the steamroller of disinformation” coming from those claiming to represent them, and the bullying that it deliberately “triggered and encouraged”. They declared, “There are organic farmers who think differently and who have the right to give their opinion.”

Sadly, to date there’s no sign that this witty attempt to encourage their opponents to lighten up and allow free debate is bearing fruit.

Indeed, after the latest death threats, Edward Mitchell was left pondering whether at this rate a winning “yes” vote on June 13 wouldn’t prompt the kind of attempted insurrection staged by Trump supporters – this time under the federal dome of the Swiss parliament.

The biologist and beekeeper, Francis Saucy, has called “for calm and dialogue”, warning that the tactics of the “no” campaign recall “the most sinister hours of the 20th century” and could leave deep wounds between beekeeping and the agribusiness sector.

Such tactics, Saucy says, “are not worthy of the democratic society of which we are so proud” – “everyone must be free to express their point of view without constraint”.